Jonathan Kush
Jonathan. K. Kush is the lead business writer at 123 Writing. He holds a BA (Hons) degree in Business Administration from the University of Brighton, UK. As a Market Research Analyst by profession, Jonathan has nearly a decades experience in market research and business analysis. His passion includes studying markets and industry trends to understand their impact on company strategy, performance and ways firms can mitigate their environment to outcompete rivals.

The UK clothing industry is perhaps the most competitive industry in the UK, with the top four clothing retailers such as M&S, Primark, Next and the Arcadia Group controlling only 25% of the total market share. In similar industries such as the UK food retailing, Tesco alone controls more than 25% of its market, yet the Big Four in clothing retailing only control 25% in total, a point which illustrates how fragmented Britain’s fashion retailing industry is.  Despite a fragmented industry, it is Primark which has been the clear winner, with statistics showing the Irish retailer sold more clothing than any other retailer in Britain as of January 2018. It has enjoyed such tremendous growth over the last 10 years due to its low cost fashion, growing from 4th largest clothing retailer in 2013 to 2nd in 2018 and predicted to overtake market leader Marks & Spencer in 2018.

Using Pestle, Swot, Porters Five Forces and the Value Chain, this report strategically looks at the macro environmental factors and key trends driving the UK clothing retail industry and how Porters five forces of competition have shaped the structure of the industry in a way that benefits Primark more than major rivals. In doing so, we examine Primark’s value chain and cost leadership advantage and whether this can help it to build a sustainable competitive advantage in the face of trends such as Brexit or the ubiquity of smartphone shopping given Primark doesn’t even own an online shop. The report concludes with personal recommendations and suggestions for the organizations future strategic practice.

NO CITATION FOR THIS WORK WAS RECORDED

By the end of the case, students should be able to:

Primark is an Irish clothing retailer founded in Dublin in 1969. Currently operating over 350 stores across Europe (with 174 stores in the UK), Primark is part of Associated British Foods which acquired it in 2005 (Primark 2017). The retailer’s turnover grew by 19% to £7.05 billion in 2017 from 2016 while profits soared by 7% to £735 million (Butler 2017). Primark has enjoyed tremendous growth over the last 10 years due to its low cost fashion, growing from 4th largest clothing retailer in 2013 to 2nd in 2018 at expense of Arcadia Group and Next in a space of less than 4 years with only Marks & Spencer ahead.
Its market share stood at 7.1% as of August 2018, up from 6.9% share of the clothing market in 2017, ahead of Next with a market share of 6.7%. Leading the market share in the British clothing and accessories industry is Marks & Spencer with market share estimated at 8.9% (Statista 2018).
Its low costs have continued to attract new customers even with the post Brexit squeeze on high street spending. Despite the fall of retail store sales in late 2017, Primark profits soared by 7% to £735 million ahead of competitors like Marks & Spencer (Butler 2017). 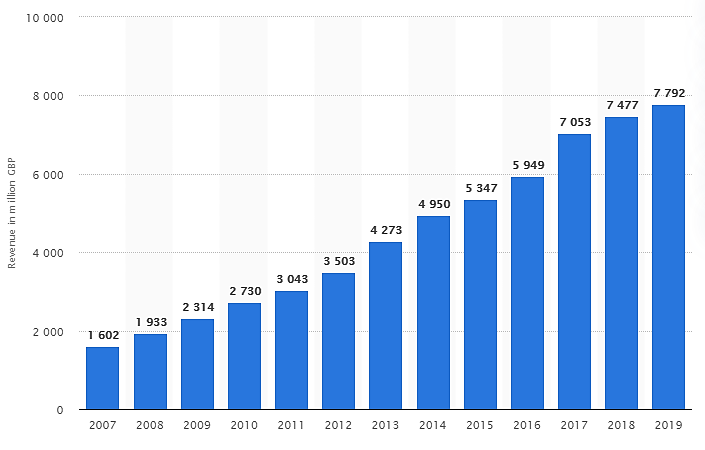 TO ALL OUR FREE SAMPLES

Services We are Offering

We are more than a free study and revision tool.
We also provide on demand research and custom writing services.

On Demand Custom Research
Struggling to meet deadlines? Worried about low grades? Lacking inspiration? Take advantage of our on-demand custom research and writing service to get your essay, report or coursework assignment written by our renown expert writers and professional online tutors.

Strategy Report Writing
With over 1,000 free strategy case studies and reports covering a wide spectrum of companies and industries, revising for your strategy assignment and coursework has never been easier. Use our strategy samples to study and revise on your own. Lacking inspiration? Struggling to meet deadlines? Try our on-demand custom research service.